skip to main | skip to sidebar

Been Down So Long It Looks Like Art to Me 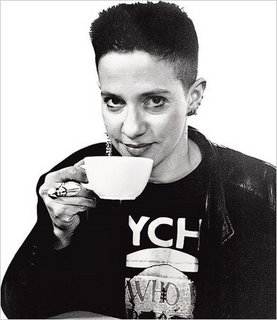 The simple answer is that almost a century ago the celluloid image began to replace the written word as our preferred mode of cultural expression. Fair enough, but it hardly seems adequate to explain and dismiss such a sweeping cultural transformation in a single sentence. The shift from page to screen must have occurred incrementally in numerous smaller, more specific dislocations, the cumulative effect of which has been the near-collapse of written culture. By studying one particular place and moment in this long seismic shift, we can perhaps better understand why magazine layouts increasingly resemble TV screens, and why a well-received book may now be written by someone who has never read one.

One bit of forensic evidence to have been pulled from the wreckage is "Up Is Up, But So Is Down: New York’s Downtown Literary Scene, 1974-1992,” edited by Brandon Stosuy. This anthology is reviewed in this week's New York Times by Meghan O' Rourke, who, in doing so, faced a series of uneviable tasks. First, in order to write the review, she had to read the book, or at least flip through it. Stosuy's writing may be fine, but sadly, this isn't an anthology of his writing. Second, she had to cobble together a semi-interesting piece of journalism about a stillborn literary movement that somehow persisted, according to the book's subtitle, for almost 20 years. Finally, while feigning enthusiasm for this project (perhaps her editors found the first draft too caustic), O'Rourke clearly felt a duty to warn her readers as to what Stosuy had actually anthologized. Fortunately, a few choice quotations serve to sound the alarm:

"terror is released in Lower Manhattan
and the terrorists neither carry guns
nor subvert the state
but simply buy it off with ... their mastercards.”

You know, you don't actually have to be a terroristic plutocrat to own a Mastercard.

Though O'Rourke claims to find passages like the one above compelling, her own distate for the material keeps bleeding through: " 'Up Is Up' itself has a scrap-book feel. It gathers poems, excerpts and short stories as well as handmade magazine covers, pamphlets and posters that capture the collaborative, on-the-fly spirit of the period."

In other words, it's a garbage bag full of rotten writing. Here is another example of O'Rourke offering praise, then allowing the quotation to make clear what politesse forbids:

"There are surprises, too — like Holly Anderson, who writes haiku-like prose-poems of delicate lyricism trapped in crossword grids. Each letter is separated from the others as if imprisoned, evoking both the density and the loneliness of the city, and challenging the reader to make “sense” of the lapidary inscriptions. One series reads “LASt Nt ON A BLACK ROAD I tOLD tHEM MY COUSINS WOULD CAtCH FIREFLIES SMASH tHEM & SMEAR tHEIR LIGHt ON OUR FACES. But the effect is partly lost in transcription."

This quotation reminds me of one of those horrific, accident scene photographs you were shown in health science class to frighten you away from ever mixing fast cars and hard liquor. Lady, I'm convinced! But, if you're not yet, here is "New York: 1979," written by "cultural provocateur" Kathy Acker, who wrote under the pen name "the Black Tarantula" and who now gazes at you "transgressively" from the photo above:

“New York City is a pit-hole: Since the United States government, having decided that New York City is no longer part of the United States of America, is dumping ... all the people they don’t want (artists, poor minorities and the media in general) on the city and refusing the city federal funds; the American bourgeoisie has left. Only the poor: artists, Puerto Ricans who can’t afford to move ... and rich Europeans ... inhabit this city. Meanwhile the temperature is getting hotter and hotter so no one can think clearly. No one perceives. No one cares. Insane madness come out like life is a terrific party.”

Wait a minute, let me get my pen. OK, the government is dumping all of its wretched refuse onto the city of New York. Isn't that what the Statue of Liberty celebrates? Ah, but now the abandoned rabble consists of neglected artists, poor minorities, and "the media in general." Evidently, those condemned to exile in New York include Time Magazine, CBS News, Knopf Publishing, and Kathy Acker. Oh, and some Puerto Ricans.

And look at the final line, or sentence, depending on whether this is supposed to be a work of poetry, or of prose. Does Acker not "perceive," or does she not "care," that the words "madness" and "insanity" are synonyms, and therefore, to speak of "madness" as "insane" is as crazily demented as describing "moisture" as "damp," or "eternity" as "endless?" My God, it's chaos gone out of control!

Sorry, Black Tarantula, but this sort of writing is a pile of shite. What I can't fathom is why this art action, or liberation movement, or free-form guerilla campaign, is considered by anyone to be worthy of notice, or study, or anything other than contempt. In New York, the self-proclaimed cultural capital of America (perhaps because the government keeps dumping unwanted artists and media people there), this sort of bourgeois-baiting declaration was being "emitted" a quarter century ago by a coterie of talentless adolescents pushing 40, and is now being anthologized, reviewed, and worst of all, revived.

According to Stosuy, "Though much of it is out of print and difficult to locate, Downtown writing has never been more relevant." Horrible to contemplate, but in a way, he may be right. As awful as the crayon books and "Xeroxed zines" of the downtown scene may have been, they do raise the unavoidable question. "Why?" Why would anyone want to write like this? Why would anyone want to read this? More disturbingly, why am I writing about this in 2006?

Was 1980 some pivotal moment when the visual image gained its ultimate ascendency, and the word "art" came to signify a bit of a joke to anyone with an IQ above 105? Wouldn't a quiet afternoon with a paper sack and a tube of glue prove more illuminating than subjecting oneself in the outcries of these rebel angels? Does this explain in any way the triumph of the electronic image? And finally, care to guess how many of these black-clad doomsayers are still subsisting on their parents' "terroristic" Mastercards?

Lest I create the impression that I hate everything, I should say that O'Rourke's review does mention two artists of the period whose work I have found both interesting and entertaining. The late Spaulding Gray, who committed suicide, or is believed to have committed suicide (no body was ever found) could be an amusing, witty, and gently ironic writer and performer, once described as a "WASP Woody Allen." David Wojnarowicz, a painter mostly, was a weird talent, but a real one, whose canvases incorporated images of gigantic dinosaurs, dung beetles, crumbling Mayan ruins, and graphic gay sex, all fused with anger, a kind of found-object mysticism, and an ironic sense of grandeur. Wojnarowicz died of AIDS in the early 90s.

I think it revealing that O'Rourke quotes from neither Gray nor Wojnarowicz (whose prose pieces, though not nearly as compelling as his visual art, at least occasionally offer a kind of hyper-paranoid intensity more intriguing than anything Kathy Acker ever dreamed of writing). It is this that leads me to believe O'Rourke selected her quotes with an eye toward the protection of unwary readers . By the way, "Up is Up" sells for ninety bucks hardback, and thirty paper, if you have no idea what to do with your money.

One more quotation from O'Rourke's review:

" 'Up Is Up' may not entirely convince us that this particular literary efflorescence is as remarkable as the literary movements that preceded it; plenty of the writing here is mediocre, in particular the poetry. But as one publisher-editor says: 'Yo, listen up, Cultural Elitists, wherever you’re hiding! Most of the art may have been' — insert a four-letter word here — 'but it was a g l o r i o u s time.' ”

Consider the premises of this "publisher-editor['s]" statement:

1. That there were "Cultural Elitists . . . hiding" from these Downtown Scenesters. If so, I'm sure they had their reasons. I suspect that, back in the 80s, the Cultural Elitists were in hiding, in the same way that, in high school, you avoided that isolated and perhaps dangerously unstable kid who latched onto you for six months simply because you made the mistake of speaking to him in Gym class, once.

2. That the tastes and inhibitions of this Cultural Elite stifle raw, provocative, expression. Would that it were so! This is rather like arguing that toilet training shames and suppresses the animal psyche within the human shell, when in fact, it's just a technique to avoid shitting yourself.

3. "Most of the art may have been" . . . why all the hedging? We will assume that the four letter word to be inserted is "shit" Well, this claim seems credible, though I think "may have been" is unnecessary.

4. "but it was a g l o r i o u s time." Perhaps so, if your idea of glory is slouching around in a studded leather jacket, cropping your hair in increasingly unattractive ways, and agreeing to fake an interest in your friends' scrawled musings, if they will fake an interest in yours. For others of us, however, this again brings up painful high school memories.

Walking around Manhattan in the mid 1990s, I happened across a denzien of the streets who had copiously shit in his pants, which were now gathered haphazardly about his ankles. He kept smiling and bowing to the scurrying crowd, all of whom were doing their best to pretend they hadn't seen what they quite obviously were seeing, and I can't be sure, but I think there was a hat or a styrofoam cup at his feet. This "cultural provocateur" had turned his personal humiliation into a public display, possibly even an art event. How could I have then known that I was witnessing a downtown revival?


Update: I so enjoyed my trashing of Kathy Acker (about whom I'd known nothing before) that I got curious and Googled her. The first thing I learned is that she's dead. Breast Cancer. Are any of these people still alive? I then ran across this interview with Ms. Acker, conducted by someone called "R. U. Sirius." (Clever, eh?)

If any of you believe I was overly harsh with "the Black Tarantula," especially in light of my recent discovery of her death, I suggest you sample this conversation for yourself and see just how much of it you can stand. I was able to read maybe three-fourths.

I love the part about the effect being partly lost in transcription.

The eighties were a pretty low point in poetry generally; I suppose New York wasn't any different.

You did well to avoid this downtown scene, though I realize that in order to participate, you would've had to relocate to New York as an eight year old (approximately).

As a survior of it all (congratulations, by the way) I wonder if you found O'Rourke's selected quotations a fair representation of downtown writing, or did she pick only the most repellent bits to quote? (They really were dreadful, by the way.)

I would be curious to know your impressions of the personalities and the work of that era.